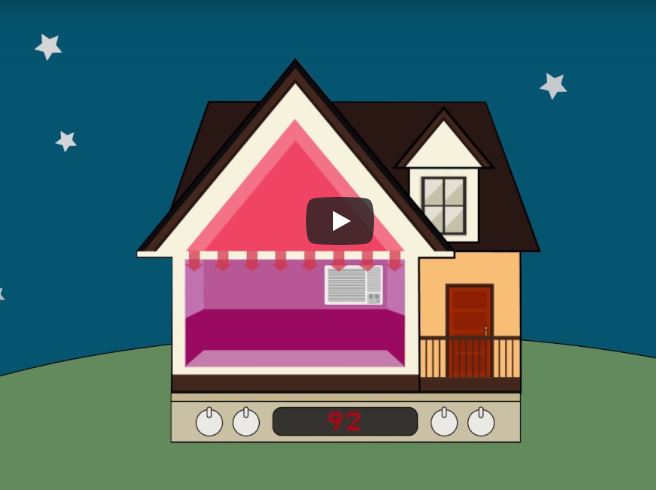 Our best-kept secret is that is QuietCool can actually heat up the home! A home that is not ventilated for long periods of time will dramatically affect the quality of air. Winter is the time of the year homeowners always keep their homes closed because they do not want to bring the cold air in so they sacrifice the air quality to stay warm. Customers can actually run their fans when it is hotter outside than inside the home, and the warm air will

A whole house fan was designed to cool the home in an efficient and simple way during seasons that become unbearable but then cool off at night. This is, undoubtedly, their primary function. It is, however, not their sole purpose.

Using a whole house fan during the winter can actually prove to be largely effective in a myriad of ways.

Running your whole house fan also gives you superior circulation of air. During the winter, most homes become stale as people do not open their windows to let new and fresh air in. This is actually quite dangerous as illness and dander can quickly build up. Allowing the home to breath brings in the fresh air and expels the old. This also improves the overall air quality. Ventilation through a whole house fan is helpful in reducing indoor air pollutants, including Volatile Organic Compounds (VOC).

You can also reduce moisture build-up indoors. This happens because as a heater is used in a home, the heat rises. Hot air is usually moist. When it then interacts with the cold outside of the roof, it creates a large amount of moisture. Running a fan through the attic gets rid of that moisture and the potential damage done to the roof. This is especially important because indoor moisture can lead to mold growth.

Lastly, you can use a whole house fan to vent odors. The machines can get rid of a poor-smelling odor or gas in the home very quickly. When you’re are cooking foods that cause odors and expecting company at any minute, removing these odors with your whole house fan is especially beneficial. It can also be used to get rid of pet odors or any smoke from a fire or from cooking.

Whole house fans may have been created to cool homes and reduces costs of air conditioning but they have a shocking number of benefits, even during the winter months.

Winter season means sick season in more ways than the obvious. Clearly, harmful pathogens and germs populate a home like unwelcome pests but there are other harmful toxins that can infect a home. Luckily, QuietCool whole house fans help fend off most airborne pollutants and improve the health of any home they are in.

A lot of the sickness that spreads quickly and devastatingly during winter is due to living areas and offices being completely sealed up. Rarely are windows open during the winter. So, buildings have no opportunity to flush out the airborne pathogens that are present.

With a QuietCool whole house fan, you can rapidly exchange the air in your home with fresh air from outside. In fact, they are able to accomplish this because their powerful motor completes 15-22 air exchanges every hour! Doing this in the middle of the day during winter will not only warm your house but will push out a lof the airborne pathogens that may exist in the home.

The Women’s Health Magazine said that “Even in the winter, cracking your window a few inches to increase airflow is a good idea. This is especially important if someone is in your home.” If this is true, just imagine how well a system that purposely brings fresh air in could help!

The possibility for harmful gasses increases during the winter as well. This is due to the number of gas appliances that are used. Gas could possibly be used for heaters, ovens, water heaters, and fireplaces. All of this gas in a home could culminate in deadly gasses filling it or even increases the likelihood of smoke filling it. If either of these became present in a home, turning on a QuietCool would quickly usher out much it. This not only is great in times of need but is reassuring in a way few other systems are.

During winter, sickness is hard to run from. So, instead of running, push sickness and harmful toxins out of your home before they get to you.

FIND A DEALER NEAR YOU

How much does it cost to install an attic fan?

Do Attic Fans Make A Difference?

We use cookies on our website to give you the most relevant experience by remembering your preferences and repeat visits. By clicking “Accept”, you consent to the use of ALL the cookies.
Do not sell my personal information.
Cookie SettingsAccept
Manage consent